Today, while investigating this web post from 2007, I received some startling information. According to SRI, while the author, Steve Hammons, says this paper is unclassified, the project it was written for apparently isn’t! Whether I can even acquire a copy of the paper described here is in doubt, and I am told I may have to ask the sponsor of the research for permission.

It would be interesting to know who laid out the cash for this research, and what, if anything was learned.

As a former investigative reporter, I know how to file a Freedom Of Information Act (FOIA) request, but I’d prefer to ask nicely first, as a FOIA request is a royal pain in the ass to the person receiving it. At the same time, I’m wondering what, exactly, have I stumbled into in my relentless quest for the truth about dolphins? What findings would warrant keeping this paper secret for more than three decades?

Is there a marine mammal equivalent to the nefarious “Men In Black” who are reported to harass UFO witnesses? If you find wet, webbed footprints leading up to my door, and scales on the doorknob… don’t come in.

This post was scanned in from a hard copy of The American Chronicle web site in the author’s possession. All rights remit to the author. Illustrations added for shits and giggles by me.

This week, the U.S. Navy  announced that up to 30 dolphins  and other marine mammals may be  used to patrol Puget Sound near Seattle to protect Kitsap-Bangor  Naval Base from terrorist activities.

Dolphins and marine mammals can  locate underwater swimmers and  objects and assist with a variety of  additional tasks.

The Navy has been working with  dolphins and marine mammals  since the 1960s.

The dolphins, sea lions and other  animals are trained and coordinated by the Navy’s Marine Mammal  Program at the Space and Naval  Warfare Systems Center (SPAWAR)  on San Diego’s Point Loma  peninsula, home to many Navy  activities.

As well as conducting various  operations, Navy research on  dolphins and marine mammal  intelligence and sonar-like  perception has also been conducted.

Marine mammals apparently were also subjects of research as  part of a “Program Plan for Anomalous Mental Phenomena.”

This effort was conducted as part of government investigations into remote viewing and anomalous cognition.

The research by May and Pleass was conducted for SRI  International, Menlo Park, California. SRI has been one of the  primary research entities conducting investigations into remote  viewing and anomalous cognition for the U.S. military and  intelligence services.

Most people have heard about SRI in connection with Project  STARGATE, the program that researched ESP, now often referred  to as anomalous cognition and the techniques called remote  viewing. The program had several other code names during the  1970s, ‘80s and ‘90s.

The research report connecting remote viewing researchers to  marine mammals seems to indicate an association that many  people are already aware of, and others probably will find  intriguing.

Developing ESP skills in humans is one thing. Examining telepathy  and other kinds of anomalous cognition in a highly intelligent  species like dolphins takes this kind of research in an even more  interesting direction.

People of many cultures who have lived near the sea and been  exposed to dolphins and other marine mammals have had tales to tell. Legends and lore about dolphins offer fascinating looks at  connections between our two species.

Personal authentic experiences have been reported by many  people about unique and signiﬁcant interactions with dolphins.

And, some people have written about possible telepathy among  dolphins, and between dolphins and human.

Although these reports often come from credible people, they are  also difficult or impossible to verify scientifically.

Many scientists have researched dolphins, whales and other  marine mammals. Probably the most well-known of these is the  late John C. Lilly, M.D. (1915-2001).

The 1973 movie THE DAY OF THE DOLPHIN was based on Lilly’s  work. George C. Scott starred as a character similar to Lilly.

The 1980 film ALTERED STATES was also based on Lilly’s  consciousness research.

Explaining his view of dolphins, whales and other cetaceans, he  said, “They (cetaceans) have been on the planet now with brains  our size or larger for 25 million years. We’ve only been here with  our present brain size about two-tenths of a million years. So  they’ve been here something on the order of 25 to 50 to 100  times the length of time we have.”

Lilly authored many books on consciousness and other subjects  which have been read by millions worldwide. These include MAN  AND DOLPHIN and LILLY ON DOLPHINS: HUMANS OF THE SEA.

In his later years, Lilly lived on Maui, Hawaii, and spent much  effort involved with dolphin research and understanding.

We now know that dolphins have a large brain dense with  neurological wiring, comparable to the human brain. The  functioning of the dolphin brain and entire neurological system  has been studied extensively. 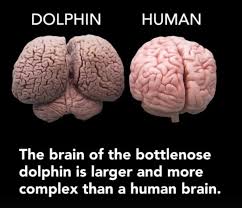 Research indicates that these creatures are highly intelligent and  may possess powers of perception that humans do not yet fully  understand.

But, maybe researchers have discovered more than the general  public knows about.

Maybe the research by Drs. May and Pleass contains important  insight into consciousness that seems especially crucial at this  time.

The human-dolphin connection may be a type of inter-species  relationship that has unique aspects. It might teach us about  human beings and our often-difficult human-caused problems on Earth.

The Navy dolphins and marine mammals, working so closely with  humans, may have valuable insight about us.

Maybe we should listen to them.

The American Chronicle and its affiliates have no responsibility for the views, opinions and information communicated here.

The contributor(s) and news providers are fully responsible for this content. In addition, the views and opinions expressed here are not necessarily those of the American Chronicle or its affiliates. 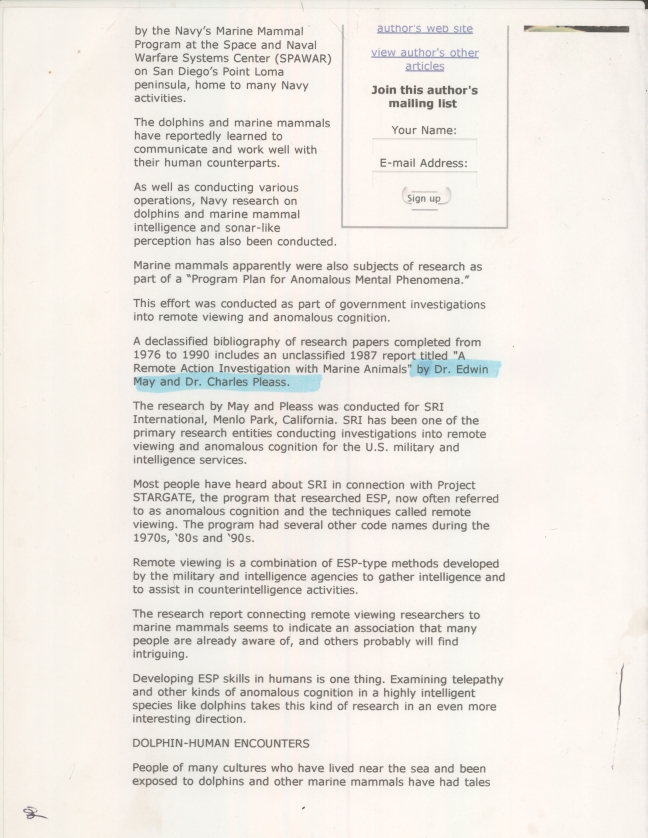 Stay tuned, more details will be released as they emerge!

One thought on “Did U.S. Navy conduct secret ESP tests with marine mammals? This guy said so, and I’m trying to find out.”